Update: thanks for checking out our article on dental office rental rates. For updated 2019 information in your local market, contact us to obtain a free rent analysis from Cirrus.

In Brief: Through 2017, we expect the dental office real estate sector to continue to strengthen across the country, making it more difficult to avoid increases in rents at renewal time for dentists.

We also expect landlords to reduce the amount of tenant inducements they are willing to offer dentists at either renewal or startup as their buildings lease up. This analysis outlines how the potential cost savings from renewing the dental office lease now could be up to $127,500 over a 5-year term. As a result, we encourage dentists to approach landlords at least 24 months before their renewal date to maximize cost savings and decrease their exposure, adding increased value to their practices through lower occupancy expenses.

The North American dental office leasing market, after several years of flat occupancy rates as well as minimal rental rate increases, is now showing a sign of expansion as the economy shows signs of growth. The overall U.S. office vacancy rate continues to decline, dipping from 12.7% at mid-year 2012 to 12.1% as of June 30, 2013, and is projected to move steadily downwards over the next several years.

Additionally, landlords point to strong demand for 2017 deals which are posed to accelerate the decline in occupancy rates over the next six months. In addition to this, and specific to the dental market, the number of professionals starting a dental practice, signing new leases across the US and Canada through the first half of 2013 was 16.8% higher than the same period in 2012 leading to more demand, and shrinking the supply of space available to dentists in many centers.

What does this mean for the average dentist in the country today? 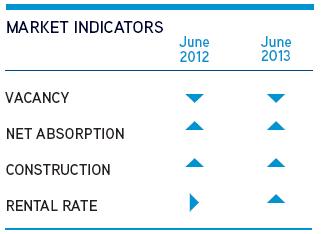 Research and data all point to landlords being more bullish over the next few quarters as they manage their buildings which have less vacancy, generally, than at any time over the past 5 years.

The likelihood is that, at the next lease renewal negotiation with landlords, landlords will be trying to push their net effective rental rates up in order to make up for years of modest rental rate and income growth. In addition to this, we are noticing that landlords are sending out fewer notifications to their dental tenants in advance of their upcoming expiry dates – likely an attempt, in our opinion, to more strategically set themselves up to capture higher renewal rates from their dental tenants.

Dental practice management consultants have always suggested, as a guideline, that occupancy costs (rents) in the average dental practice should be no more than 8-9% of total production. Unless production/revenue grows along with the forecasted and proportionate increase in rents, the cost of rents as a percentage of practice production will increase. This is a concerning trend that we are seeing in dental practices nationwide.

For the first time in over a decade, this will contribute to an erosion of profits for dentists. In other words, the take-home income that a dentist receives from his or her practice is decreasing as landlords (at renewal time) are increasing the practice’s overhead (rental expenses).

Most leases today have fixed terms, which protect the rental rate. That situation could change if landlords insist on leases that give them the option to increase the rent annually for the term of the lease. In the majority of cases this wouldn’t happen, but it’s wise to be aware of the situation and, if nothing else, be sure that you have a fixed-rate term for your lease, and that you have at least a five-year term.

What can a dentist do to avoid significant rental rate increases?

We have tracked this recommendation over the past two years and, as outlined below, have discovered that at the rates at which most market rental costs are increasing, a dentist could, in theory, save more than $127,500 in rent over the next 6.3 years (average term commitment by dentists).

In a worst-case scenario, if a dental professional renews in today’s rate environment, he or she might achieve a renewal at today’s average rates of $15 per square foot (psf). If the dentist waits three years, the market could tighten and rates increase. Then, in line with the current rate-increase curve across the market, rates could be $25 psf, – a $10 psf increase. Multiply that $10 psf change over 6.3 years on 2,000 square feet = $127,500 if the dentist renewed today (24 months in advance of the expiry date) versus renewing one year from now, with only 12 months left on the lease.

Rental Savings for Dentists Renewing in 2017 vs. 2019 Renewals & Beyond

Cirrus Consulting Group is the North American leader in helping dentists grow and protect their practices by properly and effectively setting up their dental office lease Agreements in a smart, efficient and strategic way.

Sign up below for a complimentary office lease consultation with a Cirrus expert!

What happens when you sign a bad dental office lease?